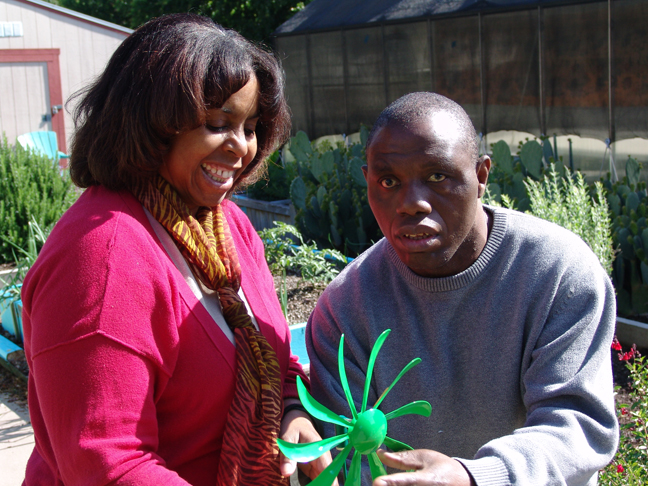 I remember when I was first hired as a direct care provider for individuals with autism. A bit different from my prior experience working for others with disabilities, I had no idea what to expect. Though a bit intimidated, I would soon learn I was entering a special world.

My first assigned client was Steven, who has autism, male, mid thirties, stubborn and blind! My immediate thought: “How would I pull this off?” But once I met him, we meshed right away. I was also in my thirties and pretty persistent; we would get along just fine (I hoped).

During my initial observation, I saw that Steven was just like you and me. He had rights like you and me. And he had needs like you and me. Good, I thought, “treat others as you would like to be treated.” Never again did I feel intimidated or reluctant, only excited and challenged each and every day.

My mission was to help Steven develop some independence. Establishing a rapport, slowly and attentively, as I was trained, I was determined we would find a way to successfully achieve this goal. This would be the beginning of a long friendship. I even created a special way to identify myself when saying “hello.” As a routine was created, Steven began to function independently, performing daily living tasks with little to no supervision necessary. A favorite memory is of a time after dinner, Steven was cleaning up and I had to answer the door, when I returned, he had independently loaded the dishwasher and started it! I jumped for joy when I discovered he had correctly loaded it, as we had been working on this goal for some time. Getting that silverware in those small slots was a challenge, and he did it! Steven felt accomplished and I felt proud of the work we’d done together.

Consistency and repetition became the best way to accomplish our goals, and would become my “rule of thumb” when working with not only Steven, but with all of my clients. Throughout my many years working with children and adults with autism, I realized that each person is truly “individualized.” Sure they may have some of the same traits of autism (turning around in circles, rocking back and forth), but these are only a couple of the many behaviors they share.

All in all people with autism are just like the “average Joe,” they just need a hand to help them out of the starting gates. Although he is no longer my primary client, I still get to visit with Steven from time to time, and he still remembers our special sign for “hello.” I am reminded that autism is a lifelong disorder that affects many, which is why it is even more important for us to do what we can to make it better for these children and adults. 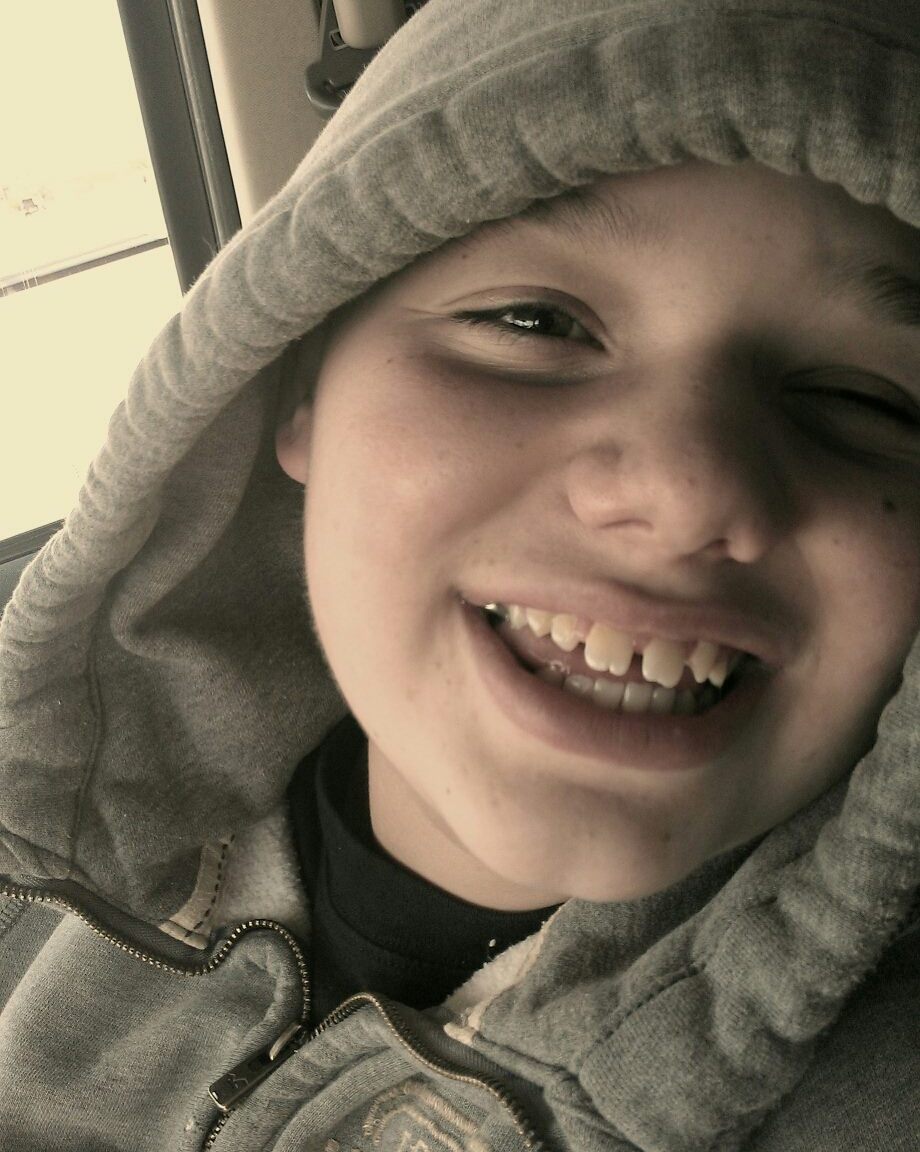 I am Jacob. I have Autism. Everybody knows somebody who has Autism. Every person needs a really great person helping them. A helper is a push in the right direction. Dri (Jacob's nickname for his teacher Adrianna) places a letter board in front of me. A person doesn't learn instantly how to use a letter board. Takes tons of practice. I am happy I learned about Soma. (Soma is a form of therapy at Halo in Austin) Prayers are answered. I owe Soma a kind thanks.

Jacob Hammons was diagnosed with a form of Autism called pervasive developmental disorder on his third birthday, January 13, 2003. The neurologist gave him and his family little hope and told them to plan on a lifetime of care. Jacob and his family literally traveled the United States searching for a cure. After years of therapy, at the age of 13 Jacob has finally found his voice. As you will see, he is a typical teenager with a passion for autism awareness and a great sense of humor.  We look forward to sharing more writings in the future.  Jacob is currently receiving therapy at the Autism Treatment Center Therapy Clinic in Fort Worth.
Posted by Autism Treatment Center at 1:07 PM No comments:

Learning the Art of Communication

For much of my life, I have had a hard time understanding not only the non-verbal communication of others, but how my own non-verbal communication affected others. Sometimes, if I was irritated at someone, I would simply keep my mouth shut, the rationale being, “They can’t hold me accountable for something I didn’t say.” What I failed to realize was that sometimes silence speaks louder than anything you could say, or that you could say one thing, but your facial expressions, actions, and certainly body language tell the real story.

In a similar vein, I didn’t realize that just because someone answers your questions, it doesn’t always mean they have much interest in talking to you. For instance, if they look away, give one or two word answers, or don’t answer at all, that’s a clear sign they are either not interested in talking to you, or are pre-occupied at the moment. Yes, you probably already knew that, but if you’re on the autism spectrum, however high-functioning you may be, that may be somewhat hard to grasp.

For me to handle these situations appropriately, I have to set my mind to it and make a point of looking for the non-verbal clues that come so easily to those not on the spectrum. For instance, one day I asked a co-worker about something non-work related. I told myself beforehand that if he gave me an abrupt or one-word answer, I would just let it go. As it happened, he answered, and then went on to elaborate on his answer. I took that as an invitation to inquire further, which I did, and he again gave me a friendly answer.

The point is, if I’m going to be appropriate in personal interactions, I have to go into it with a “battle plan,” and anticipate how I’ll react to not just what the other person says, but also to how they say it, and other non-verbal social cues. Many times, people don’t believe I have Asperger’s because my social skills have improved somewhat over the years, but what they don’t realize is, I had to do a lot of work to get to where I am, and I’m still working on it. Remember that, socially, the Aspie is a work in progress. But then, aren’t we all?

Ken Kellam III was diagnosed with Asperger's in his late 30's. He recently celebrated his 10th anniversary at ATC, where he works as Administrative Assistant to Dr. Carolyn Garver. He has been married for two years, and his wife also works at ATC as a Teaching Assistant.

He was born in Austria in 1906. As a child, making friends didn't come easily and he was considered lonely and remote, but he was talented in language. In particular, he had an interest in poetry. He was known to quote his favorite Austrian poet to classmates—not that they were interested. He also quoted himself, and sometimes referred to himself in the third-person. He displayed characteristics of the condition that would one day bear his name.
When he was older he studied medicine in his home country, earned his medical degree and became director of special education at a children’s clinic—all by the time he was 26. A few years later, he got married and eventually had five children of his own.
He identified in four boys a pattern of behavior and abilities that included a lack of empathy, little ability to form friendships, one-sided conversations, intense interest in a special subject, and clumsy movements. He called them “little professors” due to their ability to discuss their favorite subject in great detail. Some of the children he diagnosed went on to great careers, among them a professor of astronomy and a Nobel Prize in Literature laureate.
When he died in 1980, he wasn’t well-known outside of Vienna, partly because his findings had yet to be translated from his native German. Since then, his findings have become renowned the world over. Today, the condition he identified, and may well have had, is named after him.

Learn more about Asperger's Syndrome and other forms of Autism Spectrum Disorders here.

Posted by Autism Treatment Center at 9:45 AM No comments: